II. What is Vaping?

a. Propylene Glycol and Vegetable Glycerin

b. Cinnamaldehyde and Vanillin

IV. Can Vaping Cause COPD?

Chronic Obstructive Pulmonary Disease (COPD) is a progressive lung disease that often combines emphysema, chronic bronchitis, and sometimes even asthma. COPD can cause breathlessness, chronic cough, and the feeling of fatigue at the early stages. In 2015, it was estimated that over three million deaths were caused by the disease; that is a total of five percent of global deaths in 2015 alone. COPD is a common disease in low-income countries but can afflict anyone. In developed countries, smoking is the primary risk factor for COPD.

Vaping is the act of inhaling or exhaling vapor, which is produced by an e-cigarette, vape pen, or other personalized vaporizers. E-cigarettes do not produce tobacco smoke but rather a substance called aerosol (vapor) that consists of many fine particles; vapor in this instance should not be mistaken for water vapor. The particles present in aerosol contain some toxic chemicals that have been indicated in an increased risk of cancer, respiratory, and heart disease. A vaping device consists of a mouthpiece, battery, e-liquid containing cartridge, and a heating component. During use, the heating component turns the e-liquid into a vapor that is then inhaled into the lungs. [1] 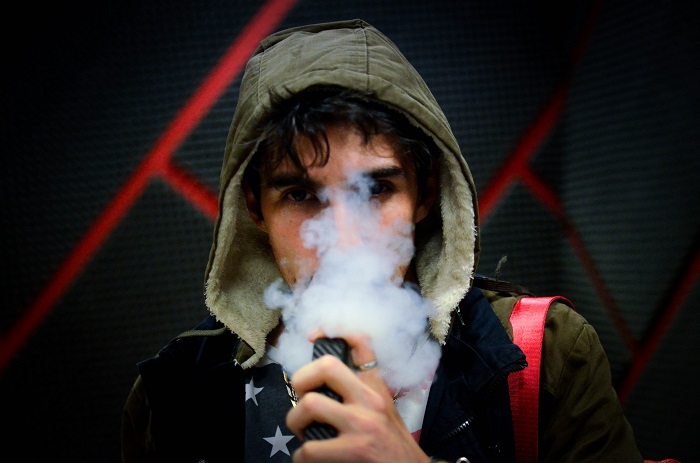 The Dangers of Vape E-Liquid Ingredients

Ingredients in the e-liquid of vaporizer products often include or produce: 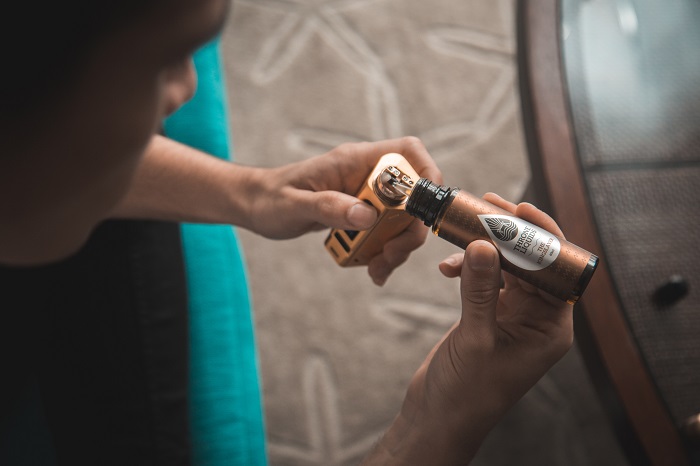 A study conducted by the University of North Carolina evaluated the toxicity of ingredients present in vape e-liquid. The data demonstrate that propylene glycol (PG) and vegetable glycerin (VG), two primary ingredients found in e-cigarettes, are toxic to cells in the body and adversely affect cell viability. Furthermore, the findings show that higher levels of PG, VG, and other chemicals in an e-liquid, correlate with greater toxicity.

Acrolein is a clear or yellow liquid that forms when animal and vegetable fats are heated. Acrolein is a known herbicide used to control plant and algae growth by killing microorganisms and bacteria. Repeated exposure to acrolein produced by heating propylene glycol and glycerin in e-liquids causes a host of negative consequences. Acrolein reacts negatively with respiratory-lining fluid and cellular macromolecules. Exposure to acrolein reduces the body’s immune response and neutrophil recruitment, which is essential for fighting off infection.

Furthermore, acrolein increases inflammation, interferes with mucus transport, and disrupts the integrity of the lung's air sacs (alveoli), which are necessary for breathing. Acrolein alters gene regulation and can cause severe lung tissue damage, COPD, and in some cases, asthma and lung cancer. [3] [4] [10]

There are over seven thousand vape flavors to choose from that range from cherry to tobacco to popcorn flavor. There may be thousands of chemicals that go into creating these different vape flavors. Diacetyl is a common flavoring ingredient in vape e-liquid and is responsible for a buttery-popcorn taste.

Diacetyl was once thought to be safe for use, but recent research indicates otherwise. Inhaling diacetyl can trigger a lung disease called bronchiolitis obliterans (known as popcorn lung).  This popcorn lung condition is incurable. [5] Some e-cigarette companies add diacetyl to certain e-liquid flavors such as vanilla, coconut, maple, and more.

In bronchiolitis obliterans, the tiny air sacs in the lungs (alveoli) become scarred. Scarring causes a thickening and narrowing of the airways. Popcorn lung is a serious and sometimes life-threatening disease accompanied by symptoms similar to COPD, such as shortness of breath, chronic cough, and wheezing.  Researchers at Harvard University found that as many as 39 out of 51 e-cigarette brands contained diacetyl. [6] [7]

Nicotine is most commonly known to be an ingredient in cigarette smoke. But nicotine is also a primary ingredient in e-cigarettes and other personal vaping devices. In 2018, 19 percent of girls and 23 percent of boys of middle and high school ages reported e-cigarette use. Until age 25, the brain is still growing. Therefore nicotine use in young adolescents can be especially harmful. The nicotine in e-cigarettes can interrupt the brain's impulse control mechanisms, priming young adolescents for addiction to other drugs, including cocaine. [8]

Vitamin-E acetate is an additive most commonly found in THC-containing e-cigarettes or other vaping products. Vitamin-E is found in many foods, such as vegetable oils and cosmetic products, such as skin creams. When vitamin-E is ingested as a supplement or applied to the skin, it most often does not cause harm, but when it is inhaled, it can cause serious damage to the lungs. Vitamin-E acetate in vaping products is used as a condensing agent. From individuals who have been attributed with vaping-related problems, all injured lung fluid samples appear to harbor particles of Vitamin-E acetate. [9]

Can Vaping Cause COPD?

As of February 2020, the Centers for Disease Control and Prevention reported a total of 2,807 hospitalizations and 68 deaths due to vaping-related problems. The symptoms of vaping-related lung illness include difficulty breathing, chest pain, gastrointestinal sickness, and can lead to serious lung damage and death. 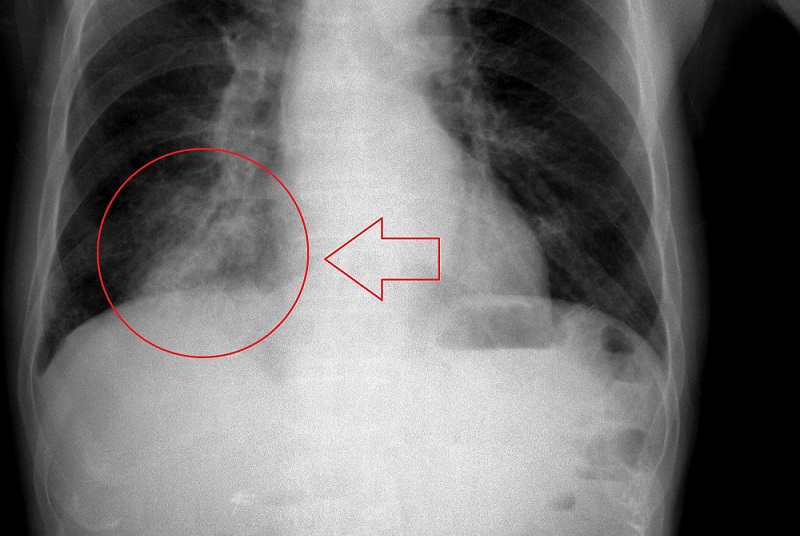 In December 2019, the American Journal of Preventive Medicine published the first-ever longitudinal study analyzing the association of e-cigarette use with respiratory diseases among young adults. There were several significant findings.

Further Research Needs to be Done 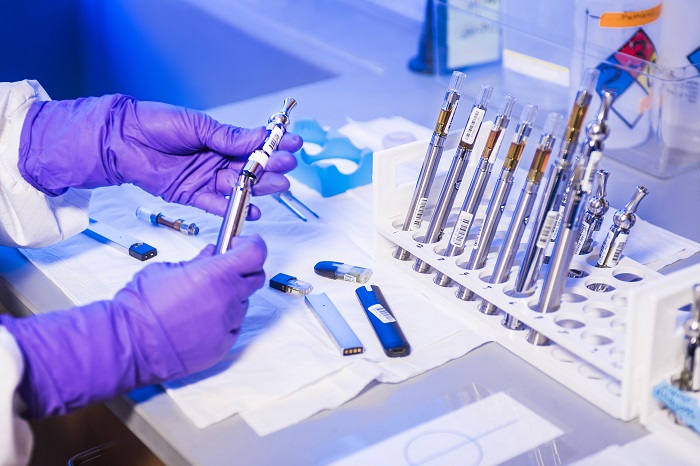 The truth is that the use of e-cigarettes and vaping products is a new phenomenon. Widespread use has only been happening for around a decade. Public knowledge of the risks associated with vaping has only developed in the last two years. Scientific research and hospitalization reports now clearly demonstrate the dangers of vaping, such as the increased risk of lung damage, lung cancer, COPD, and in severe cases, death.

Many of the studies conducted on vaping products are short-term. There is a considerable gap in the research identifying the long-term health effects of vaping product use. Therefore, more longitudinal studies are needed.

Many cases of COPD can be prevented by not smoking. COPD and lung damage risks associated with the use of vaping products are now known. Extensive dual use of both cigarettes and e-cigarettes is even more dangerous.

The Centers for Disease Control and Prevention states that if someone chooses to use e-cigarettes as an alternative to cigarettes, they should switch over entirely from using one product to another. People who use nicotine-containing e-cigarettes or other vaping products as an alternative to cigarettes should not go back to smoking. If you need help quitting tobacco products, e-cigarettes, or other personal vaping devices, always speak with your healthcare provider on resources available to help you quit.